This Year We Need Transgender Visibility More Than Ever 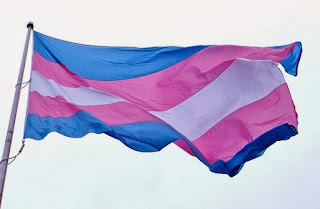 Trans Invisibility allows others to pretend there is bland homogeneity and that diversity in sex or gender is deviance.

Saturday March 31st marks Transgender Day of Visibility (TDOV). TDOV aims to promote acceptance of trans people, safeguarding their rights and combating hatred. Hatred relies on stereotyping groups of people and on self-limiting mindsets. Too often these are fuelled by a press whose prevalent view mi of a trans person is ‘a man in a dress’. The person inside is cruelly willed into forced invisibility.

I grew up with a secret, imaginary group of playmates. So many kids have imaginary friends. They provide a platform for rehearsing and exploring experiences outside the child’s own. Lonely children find a companion that comforts them whether it be a friend or an animal. It’s all in your head. When you’re a trans child, you tend live like that continually. The life you lead bears no resemblance to the one you need in order to help you thrive. Little girls crave other girls to play with, I did too. Until I went to school it was J, the girl across the road. When I started school, that had to change. Boys are supposed to play ball with other boys, not skipping with girls. J and I didn’t play together after that. I made friends with A, another lonely soul in the playground but her family moved away. Then I too became a loner, living inside my head with J & A, as my imaginary playmates. Teachers told my mum, with concern, that I was withdrawn and unsociable. Unknown to them, my imaginary life, though invisible to others, sustained me and held me up. Looking back, the imaginary experiences are the ones I cherish most. They helped me keep the faith in who I was.
Growing up I longed to be an ordinary girl like everyone else, blend in and be unexceptional. I was the boy who wanted to grow up and be a mum and a wife, not a dad or a husband. I viewed the bullying and hatred I received as my fault. Becoming invisible seemed the way forward.

Even though I craved it so strongly as a child, I see now what a dangerous place it is. You are benignly invisible if you stick to the rules. As an adult living in a conservative rural area, I rapidly discovered those rules were very restrictive indeed. Step outside them, dare to be visible and you are a target. Worse of all if others discover your secret they can threaten to out you. ‘Outing’ is forced visibility; their choice not yours. Invisibility becomes a trap not a refuge.

Being invisible with gender identity issues involves hiding your true self. When we hide we get smaller, shrink into ourselves and lose confidence. It is a dismal place to be. More importantly, invisibility breeds ignorance in others. Trans invisibility allows others to pretend there is bland homogeneity and that diversity in sex or gender is deviance. It also prevents others seeing they are not alone. Growing up a trans child, I wish there had been visible role models to give me hope for the future. I had none and the loneliness quite literally nearly killed me when I tried to take my own life.

Ironically, more often than not I seem to be invisible these days. I pass well. Others are doubting or incredulous if I ‘out’ myself. I’m invisible in plain sight, a business woman working alongside her husband. I’m simply a woman. Others are not so fortunate and stand out. At times I’ve felt almost guilty. Passing well is the dream of most Trans people, yet achieving it makes you invisible again. Invariably, I end up being deliberately open about my gender history. In doing so I hope to challenge attitudes. ‘You didn’t know I was trans before I told you. Will you really treat me differently now you know?’

Treating us differently is all too likely. Only a few days ago, The Sun covered the wedding of a young couple, both with trans histories. The front page story ran with the hateful and sensational headline: ‘Tran and Wife’. A happy, smiling wedding photo was accompanied by shots of them both before transition. It typifies the attitude of many that being trans is a joke to be laughed at. Having your ‘big day’ ridiculed isn’t how most of us start married life. Trans visibility is tough.

Today, visibility for gender identity is more needed than ever, it needs to be encouraged not ridiculed. Please give trans role models a chance.

Posted by retrobassgirl at 8:25 PM