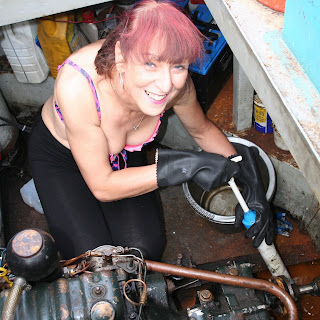 The UK Advertising Standards Agency announced recently that it would be taking a tougher line on gender stereotyping. I applaud that. It has been a long time coming. For the Trans community however gender stereotyping is something else.  We grow up battling one set of stereotypes but are often accused of over-conforming to another.

Those of us born before the millenial watershed can have very fixed ideas about gender.  Some of us were born into an era where boys were boys and girls were a good deal less equal. It was all too easy to grow up imagining that you'd settle down (as I did) with a nice guy, have two children, a dog and a beautiful but somewhat chaotic house. I imagined the house would be in a leafy Victorian suburb. I would willingly give up an academic career (as I did) to have the children I wanted. Meanwhile he would provide for a growing family with a well paid job. He would be ambitious and I would support him. I would write maybe while the kids were at school and teach part time. It was a very sexist, somewhat materialistic yet very compelling dream. Why did I buy into it? It didn't come from my mother surely. She was a feisty feminist, a local politician and writer. She believed quite rightly that women were equal to men. She chose to have only one child and a career. She also encouraged her daughter to believe she could achieve anything if she tried hard enough.

Though advertising was partly to blame, I suppose I absorbed some of my aspirations from my friends and social circle. They were mainly other girls. In addition I rebelled against overmuch encouragement to be equal to boys.  After all, as far as others were concerned, I was supposed to be one. I hated the expectations of macho manhood, male responsibility, over assertiveness and dominance. No wonder I chose the opposite, wanting to create and nurture life, not to direct and command it. Rejecting masculinity as I child I hit the feminine side of life so hard that I became girly to the n'th degree, at least for a while. When someone denies your right to be the gender you are, you can go to extremes. As as teen I rejected one stereotype yet almost fell into another.

So, what if there had been no gender expectations? Would I still have identified strongly as a girl? As it was, I defied traditional gender roles, learning to sew and stitch my own clothes, dressing and presenting androgynously. A transgender parent, Kori Doty, recently had their baby Searyl categorised as neither male nor female. Their child will hopefully grow up with no parental expectations and I'm sure they will endeavour to shield them from sexist notions and stereotypes that might influence a young mind. So does it really matter what gender you claim? Do you even need to have one? In an era when FtM fathers give birth and MtF mothers breastfeed their babies, traditional gender reference points are being challenged. Non-binary people exist without traditional gender markers and my bi-gender partner is sometimes my wife as well as my husband. I often ask people, 'So how do you know that you're male or female? Could you prove it without resorting to a birth certificate or focussing solely on what's between your legs? Arguments inevitably arise around genitalia, bearing children or having experienced life from a disadvantaged perspective. I have used some of these arguments myself. Yet genitalia are markers of sex not gender. Shared female experiences like my own try to define women in terms of negative treatment. I have held on to them because it helps support my feminist ideology. None of this helps however. Your gender is who you are and a person is so much more than just a body part. Fond as I was of gender markers as an anchor point, I suspect they are a substitute for getting to know a person fully. We don't have to think about a person's uniqueness if we can apply a label to them. We can assume they conform to a set of collective attributes. If we accept that everyone is unique, why categorise? It is a marker of a respectful thinking society that we allow someone to define themselves as a person without thinking we know better.

None of this is a threat to who we are or the way we want to do things. I am respectful of gender non-conformity in spite of having done the big white wedding and being a Bride in a beautiful dress. I loved having my future husband propose on one knee. I asked my cousin to 'give me away'. I felt accomplished being a stay at home Mum and nurturing a family.  These are traditions and personal decisions. They are not rules or a code to classify someone by. Neither are they reasons to accuse someone of being stereotypically female. Indeed, they can be flouted or embraced. We can choose some and leave others. Perfectly content wielding a socket set or pumping out the bilge on my houseboat home, I am also equally happy at the helm of a 35 foot cruising yacht. If we use pre-millennial reference points to position ourselves we mustn't insist everyone does the same. Dearly as I once held  the concepts of male and female, if their meanings are used to insult and tyrannise, they have outlived their usefulness.


Huggs, Jane xx
Posted by retrobassgirl at 11:47 AM